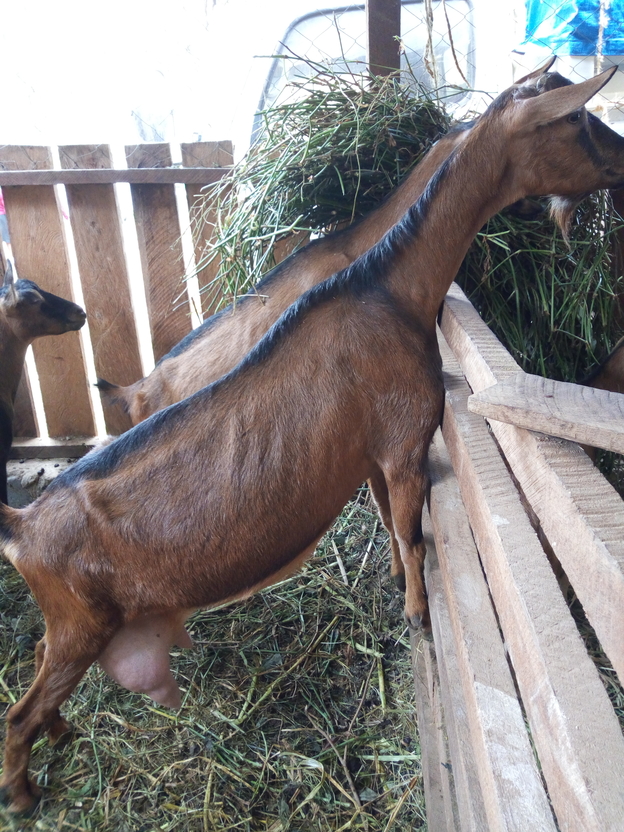 Dairy goats are more profitable in Kenya than dairy cows

Farmers who rear five dairy goats stand to benefit 45 per cent more than those farmers rearing one dairy cow. This is because goats do not need much feeds and space to keep yet their milk always retails at high price as compared to that of a cow.

According to Hellen Kamba, a farm manager at Shambah Dairies farm based in Kangema, Murang’a County and which offers training to smallholder dairy goat farmers, dairy goats need less land or space and feeds as compared to the same number of dairy cows.

“Farmers need to be aware that a half an acre of Napier grass can support five dairy goats while the same measure of Napier grass only supports one dairy cow. With this knowledge out there farmers can make the right decision on which venture to pursue,” said Kamba.

Early studies have found that nutrients like iron, calcium, magnesium and phosphorous were more easily digested and used by the body in goat milk than cow milk.

Shambah Dairies takes farmers through feeding, housing and protection of the goats against diseases.

Hellen advises farmers that dairy goats should be given a balanced diet like proteins rich feeds such as desmodium, lucerne, calliandra, green leaves and nutritious salt lick, which is constantly in their cages.

“To achieve maximum production from your goats, 50 percent of your efforts should go to feeding, 25 percent to their general care and 25 percent to proper breeding,” said Hellen, adding that they feed their animals on hay and premix daily.

Kiringai Kamau is a dairy goat farmer and a beneficiary of Shambah Dairies. After his coffee farm failed, he decided to buy the goats at Sh12, 000 each from Nyeri. Today he is one of the suppliers of goat milk to Kibidav Dairiesin Murang’a.

Kamba says poor management of dairy goats is one of the main problems facing the dairy goat sub-sector in Kenya. Although farmers spend a lot of money buying dairy goats, it is a pity when one visits their homesteads and sees the condition of the goats, including the goat sheds

“Selective breeding is important, but farmers should know that breeding alone cannot give a good quality dairy goat.”

To help farmers have practical learning sessions, the farm has its own goats and facilities through which they offer the training.

“We keep over 80 dairy goats in total,” says Hellen. “Currently the adults are 40 and the rest are kids. Of the mature goats, we milk 30.”

Small scale farmers in Kenya will have access to pest resistant Genetically Modified cotton in the next rainy season beginning March 2019 following the development of the crop by the Kenya Agricultural and Livestock Research Organization.

“This type of cotton has been under research for 17 years and we have been given a nod by the government to introduce it to farmers in the next planting season,” said Dr. Charles Waturu, a principal GM cotton researcher at KALRO.

“The cotton has been genetically enhanced with bt genes to protect it against African bollworm, a major pest that destroys cotton in Kenya.

National performance trials of the cotton are currently being done by the Kenya Plant Health Inspectorate Service (KEPHIS) in Alupe in Busia, Kerio Valley and Perkerra irrigation sites in the Rift Valley and Kibos in Kisumu.

According to data from the Fibre Crops Directorate under the Agriculture and Food Authority, farmers growing the crop have reduced by half from about 70,000 farmers in the 1980s to an average of 39,000 farmers currently.

This has led to a drop in production from 70,000 bales per season to 28,000 bales. The textile industry in Kenya requires about 140,000 bales a year and this leaves it with a deficit of 112,000 bales which is curbed through imports from Uganda and Tanzania.