Insects are the future food for human beings 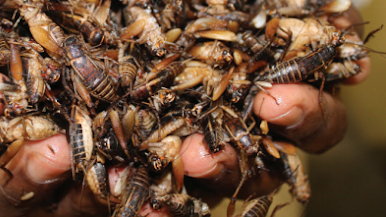 Insects are an alternative source of animal protein

The UN food and agriculture organization estimates that 2 billion people consume insects as part of their daily diet. Eating insects is common in many places of the world and insects will be the future food for human beings.it did not get our county Kenya by surprise. Some entrepreneurs have proven that Kenya is ready to consume insects. In fact, in the last five years, insect farming companies are being established. Our supermarkets are full of insect snacks, even in some hotels there are insect menus, insect porridge etc.

3/4
The growing penetration of insects into the food systems, via @Anansi_Farms pic.twitter.com/Av7ghl3JV3

In 1885 Vincent M. Holt wrote a manifesto “Why Not Eat Insects” that laid out the argument in favor of eating insects. In 2013 the United Nations put out its own version of manifesto for future prospects of food and security. The manifesto points out that by 2030 the world population will have grown to 9 billion, land will be scarce, the food crisis will surge, and there will be overfishing and not forgetting the climate change. The UN manifesto makes a clear strong point that insects are the future food for human beings.

Crickets to start with are full of protein, vitamins, fat, and fiber. They require a small space than any other animal for example livestock, and they are cold-blooded meaning they spend their fat on growth instead of warmth. This means growing 1Kg of cricket requires a lot less feed than 1Kg meat of cow.

That’s just cricket, one insect species out of 1900 others known insects to be edible. In other words, it is time to take the idea of farming insect more seriously.

How to farm edible insects

Insect farming can be done at home since it does not require a lot of space. It is a cheap method of farming because insects can be fed on vegetables and kitchen waste. They don’t need drinking water, and very little attention is needed.

Many insect farmers prefer keeping their insects in enclosed areas for example in a box or even in a greenhouse for commercial farmers. This is to prevent predictors from attacking the insect and also prevent strong wind from browning them away.

Insects grow in a cycle from eggs, larvae, pupa then adults. For example, mealworms are commonly grown in trays with wire mesh at the bottom. The farmers place live beetles at the topmost tray. The trays are arranged in a vertical way, the beetles lay eggs and are filtered by the wire mesh at the bottom to the next tray below. When the baby mealworms hatch, they are filtered to the tray below, and the cycle continues each phase of the worm in a different tray.

As we continual to say that insects are nutritious, do not forget that not all insects are edible, some are very poisonous.