Illegal import of sugar is killing farmers and millers in Kenya 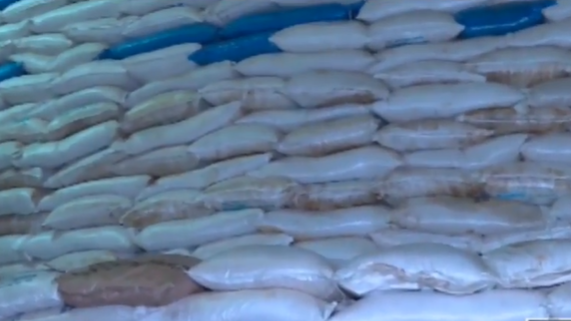 Millers react to the import of illegal sugar to Kenya

Sugar millers and farmers have once again petitioned the national government to tighten control against the importation of illegal sugar to Kenya through porous borders.

The millers now want the government to seize sugar imports in a bid to avert the collapse of the local sugar industry. Cane farmers in Busia County lamented against the country’s entry point saying that the illegal import of sugar has been a source of pain and agony in their venture.

Cane farmers and millers want the government to tighten security at the Busia border point in order to curb the import of contraband sugar from Uganda to Kenya. They also urged politicians from both Kenya and Uganda not to politicize the matter but instead look at it from the point of view of the Kenyan farmer whose market has been illegally invaded.

They spoke during an event at Olepito Sugar factory, a subsidiary of West Kenya Sugar. 5o new tractors were launched during the event that took place on 18th November 2020.

“We feel much threatened as an investor when we see an influx of illegally imported sugar and sugarcane in this nation because it definitely affects us and you as a farmer “ Gerald Okoth, GM West Kenya Sugar.

“Nobody should just come from nowhere and destroy our businesses. After agony and spending money, we should not allow a few individuals to pass through the back door and cause the collapse of our sugar industry” a cane farmer was quoted saying this at the event.

It is not the first time that millers and cane farmers are crying to the government seeking assistance to stop the import of illegal sugar to Kenya. In 2019, Chemelil sugar raised alarms over the dropping of sugar prices which was caused by the illegal import of sugar from Uganda. In 2018, the Parliament of Kenya was investigating a scandal relating to the import of 148 thousand metric tones of contraband sugar that was poisonous and contaminated with mercury.

More stories on the import of illegal sugar in the tweet below.....